The Power of a Hug | Boston Bodyworker

I have been trying to gather all my emotions, thoughts, feelings and experiences from this past year since “the blasts”.  Like so many of us in Boston, the past 12 months have been a strange combination of both clarity and haze. Two months following the attacks on Boylston Street, a temporary make shift memorial was blanketed with the physical markers of grief and remembrance: stuffed animals, flowers, crosses, photographs, candles, baseball caps, dozens of pairs of running shoes. For those who pass by the square, this makeshift memorial to the Boston Marathon bombing victims and survivors remained a stirring testament to the strength of the city and its people.  If you were not in the city following these horrible events, it would be understandable how your lives could again return to “normal”.  Seeing this constant daily reminder outside my window once we reopened 10 days after the blasts was both an elixir and venom that coursed through my veins.   My moral compass was spinning out of control and I was uncertain how to regain balance in my life.

Tragedy is not new to me.  I have suffered the tragic loss of many friends over the years.  As a matter of fact, I still don’t think I have come to grips with the loss of my best friend back in 1995.  I still wake up every day dedicated to fulfilling my promise of carrying on his kindness and caring for others through compassionate touch (he was a massage therapist).  Now, faced with the reality that Martin Richard, Crystal Campbell or Lingzi Lu could have easily been my own child, friend or colleague caught in the blasts, my emotions were swirling around and needed a place to safely land.  For the sake of both my family and my employees, I needed to channel my energy into something positive to counter act the negativity we experienced.

Within a day or so of the attacks, my wife and I decided that since there was nothing we could do here, we would best serve our children by distracting them with a trip to Busch Gardens. Quite possibly the worst vacation of my life considering how often I needed to be in contact with my operations manager and the Mayor’s office, I still believe that having my kids removed from the events in Copley and what later became events near our own neighborhood with the Governor’s enactment of shelter in place, it was the best thing for them. Upon returning to work, I had determined that I MUST find a way to prove to my kids that regardless of what negativity occurs in your life, there is ALWAYS a way to make it into a positive.

On May 28, 2013 I was contacted by Jamie Hay of the One Run for Boston. I was immediately drawn to their mission to help our city heal by putting together a nonstop running relay across the US. This spoke directly to both my city and my vast patient population of runners and tri-athletes. What I did not expect was for this relay to be one of the, if not THE most instrumental healing tools I have ever had the good fortune of wielding.  Jamie explained to me what he and his cohorts, Danny Bent and Kate Treleven were conjuring up. Their mission from the very start was to not only raise money for the victims of the marathon attacks, but to help people both near and far from Boston have a chance to heal. 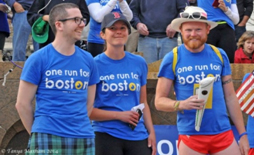 One thing that many people may not realize is that the Boston Marathon is not just a local road race held on Patriots Day.  It’s not just a race that attracts a few Kenyans amid its collection of 25K runners (36K this past year). The Boston Marathon is a bucket list event as well as an annual tradition for thousands of people from across the country and around the globe.  Bostonians were not the only ones that needed to heal. These three Brits were included in that pain we all felt and they wanted to desperately show us that people from across the pond and across this country were here, ready and willing, no, NEEDING to show support to Boston.

The inaugural One Run for Boston was like nothing the three of them imagined or had any of us for that matter. I think they learned more about America than they ever bargained for. In Danny Bent’s latest book “Not All Superheroes Wear Capes”, he chronicles his and Kate’s experiences across the USA.  What you learn is that this “crazy idea” became the inoculation that has helped so many of us heal.

Over this past year, I have experienced some of the most horrible events in my life.  I have seen many of my patients injured in the attacks. I have watched my mother’s 35 year battle with Multiple Sclerosis finally take her life this past October. I have watched one of my oldest friends bury her 8 year old little boy after a heroic battle with Mitochondrial disease. I have stood by too many graves this year and watched too many friends bury their mother, father and childhood friends. I have seen and experienced more negativity and death in this past year than I have in my entire 43 prior, yet I am stronger and more positive than I have ever been in my entire life.  Why?  Because of three strangers from England. Because of Jane Richard. Because of Brittney Loring. Because of Heather Abbott. Because of John Odom.  Because my One Run for Boston family. Because of this great city!

I Hate That I Ever Met You

On April 13, 2014 just two days shy of the one year anniversary of the Boston Marathon bombings; the second One Run for Boston completed in Copley Square surrounded by 1000’s of runners, spectators, news and media outlets. It was the most amazing display of utter pandemonium, positivity and love as runners took back the finish line of our beloved Boston Marathon and celebrated in uninhibited dancing in Copley Square.

The inaugural One Run raised $91K for the One Fund. This year’s One Run has raised over $450K. In less than one year, a wild idea, fashioned in a tiny kitchen in a quaint southern England town has risen over a half a million dollars for the One Fund and yet despite all the wonderful opportunities this money will afford the victims, no amount of money could have ever given over 2000 runners and 20 plus survivors and families, what these three Brits gave them on that glorious Sunday evening. They gave us the power to believe in community. They helped raise the level of positivity in our lives and the people around us. They showed us, by example, how to embrace a stranger with a hug and make them family. They helped us heal.  They helped my children understand that you CAN make a negative into a positive. They created a family.

Just one week before the second One Run for Boston began in Santa Monica on March 16, Danny and I were sitting in my office looking out over Copley Square.

We were having one of our many heart to hearts about life.  We started to recall the events of the past year leading up to that day. I looked at Danny and said with all my heart, “I hate that I ever met you”. He looked at me oddly for a moment and then understood what I meant.  If not for the events of April 15, 2013, we, none of my new family members, may have ever met.  The fact is that all the events of this past year have fundamentally enriched my life and the life of my family in ways that money and fame will never compare, but each of us would give it all back if we knew we could erase the cowardly events of last April.

Big hugs for my heros Kate Treleven and Danny Bent

We all latched on quickly to the mantra of ‘Boston Strong’ last year. For some, it seems that it has jumped the shark, while for others it will forever define a part of our souls. It will evoke a feeling of self empowerment, of pride, of strength, of community. It will forever remind us that there is nothing that we cannot overcome, together.  Whether we chose to or not, we are all forever linked to a part of history. Out of a year of enormous sadness and heartache come some of the greatest moments and people in my life. I have come a full 180 degrees from my emotions of last April. I choose to continue to be the conduit of positivity, kindness and love that Danny, Kate and Jamie brought across the pond to me and so many others. I choose to continue to surround myself with those I have known and have come to know who also appreciate the power of positivity, kindness and community.  From my family to each of them and their obviously amazing families, I send back with them to England a deep and sincere ‘Thank you’ and a HUGE hug from me and my girls.

God bless them. God bless all of you.