I am a cup. I come from a long line of cups. My mother was a cup. My father was a cup. My grandparents, great grandparents and extended family are ALL cups. We come in all shapes and sizes. Recently, my wife and I had some cups. We had some difficulties, like many cups do; but finally, we had our very own cups. We could not be more excited and happier. Cups have been serving as an integral role in society for as long as one can recall. Can you even imagine a world without cups?

We try to raise our cups to be tolerant and to respect and embrace the differences of others. We teach them to not judge people by the color of their lips or the smell of their breath and to be thankful of the blessing to be able to provide sustenance to others. This past week, our children were recognized by a major coffee chain for their uniqueness and were asked to perform the glorious task of providing some holiday spirit to others. As you can imagine, we were all so proud of the cups they have become and now the rest for the world would finally see what we have always known. Red cups are beautiful.

Well, you can imagine our disappointment when we learned our cups have come under great scrutiny and harsh criticism simply because of their red color. What is a parent to say to their child when people judge them by the color of their outside verses the content of what is within? I have tried to explain to my young cups that some people fear what they don’t understand and can be short sighted when they are confronted by something that, to them seems abnormal or dare I say unholy. 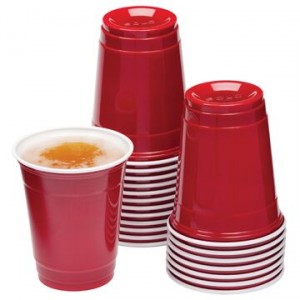 Just imagine if your child came home crying that people had been scrawling religious epitaphs all over them and being photographed, discarded and flat out crushed simply because they were red. God it makes my cup BOIL!

My youngest came to me crying and asked, “How come Uncle Red Solo Cup doesn’t get this kind of ridicule and abuse? He is ALWAYS the life of the party. He is ALWAYS the one who is the first to arrive and the last to leave. Heck, they even wrote a song about him and his family.”

All I wanted to do is hold my cups tight and tell them it’s going to be all right. But, I couldn’t. I had to explain to them just how the world works. I had to explain that there are some people who think that red cups DON’T matter. They think that by mocking a little red cup it will make them feel better about themselves. They would rather deflect their anger onto red cups instead of recognizing what the true spirit of the holiday season means to everyone, not just the minority, red cup hating coffee drinkers of the world. They would rather get their scones all crumbly about something as innocent as a plain red cup than perhaps speaking out to their politicians or posting to their social media about matters that really make the world a better place like solving world hunger and proper healthcare.   To them, equality is everyone agreeing with what they think. Picking on little red cups makes them feel better.

“But Dad, aren’t holidays like Thanksgiving, Christmas, Hanukkah and Kwanza about loving one another and respecting the beliefs of your fellow man? Don’t these same people believe in a man that commanded them to love one another just as he has loved them?

She continued, “I don’t know if I’ll ever understand why they seem to hate us so much, but the job we were asked to do is to spread the holiday spirit and that is just what me and my brothers and sisters will do. We cannot control what others feel nor how they act, we can only be the change we want to see in this world.”

It was at this moment, as my anger was steaming to the top of my cup as it would with any protective cup (not those kinds of cups silly. Don’t get me started on the black mark THEY put on our good name), that I was suddenly overcome with a feeling of admiration and pride. As I looked into my little red cup, I realized that as furious as I was about them being victimized, we had raised these red cups to be good cups.

So, as we roll towards the Thanksgiving holiday and on into the season of giving, this cup runneth over with the humility of the lessons shared with me by my own cups. I ask you to wrap your hands around our warm red cups and share this message with others. Not only do red cup lives matter, but put simply, ‘lives matter”. Cheers!