To paraphrase the great Yogi Berra; Running is 90% physical and the other half is mental. No one ever claimed to understand the old Yankee skipper, but we knew what he was attempting to say when he was discussing the ability to master the game of baseball. The same holds true with running (and many things in life). It’s obvious that running takes great physical abilities; there is however a mental component to it that is often overlooked and even more so, goes untrained and underestimated.

This past year, my involvement with the One Run for Boston, inspired my 9-year-old daughter to want to run a 5K with me. I could not think of anything more enjoyable than running with her. Knowing that developmentally she was still a far cry from accomplishing this, I knew that she would have her work cut out for her. I decided to start her on the “Couch to 5K” to ease her into the spirit of running. Her goal (that she set) was to run a 5K for the MS society on Thanksgiving in honor of my mom who passed away last October after a 35-year battle with Multiple Sclerosis.

We began our runs outside while the weather was still accommodating. She did well with the run/walk sequences, but as the runs increased to 5 minutes, I saw her starting to believe what her inner voice was telling her.

Understanding that coaching your own kid can be lesson in futility, I determined to take a different approach. Although she responded well to the constant praise and encouragement in the beginning, we were starting to hit the threshold of how impactful this was becoming and she was not buying it anymore.

She would stop, sulk and quit.

New England weather being what it is and my busy travel schedule these past couple of months threw a wrench into the consistency of her training. With just two weeks before the 5K Turkey Trot, she was only running for 5 minutes (barely). I sat her down and explained that first and foremost we would do the 5k even if it meant we would walk the whole way. Simply being on the course with her was a win. She listened to my words of encouragement and to set out with me for that days training run of 2-8 minute runs (the longest before was only 5 minutes.)

She started off well, but just 2 minutes in started to complain of a side stitch. Refusing to let her inner voice win out and knowing that she was not going to hurt herself, I pushed her until we made it to 4 minutes (tiny victory). Dejected, scared and breathing very heavy, she asked,

Olivia: Could we just run 2 minutes, walk 2 minutes and repeat that cycle?

Now was the time I had to prove to her that her body was physically capable of doing much more than she could imagine and it was her head that was telling her that she could not.

[Walking slowly, but counting down to our next 8-minute run]

Dad: Olivia, I want you to get out of your head and into your body. I want you to recognize that you are letting your inner voice determine your ability and not allowing your body to perform what I know it is capable of. I want you to trust me when I tell you that I won’t let you get hurt. Listen to my voice. Focus on my words and you will do just fine.”

[1 minute before we start the next run]

Dad: Olivia, do you trust me?

Dad: Here we go ‘Liv (starting to run together) I’m thinking of a Disney character that we met in Disney.

Dad: I want you to guess who I am thinking of, similar to the animal guessing game we sometimes play when we go on long rides.

Olivia: Ok, umm…is it a prince or a princess?

I continue to keep her thinking and guessing (2 minutes have passed). The questions keep coming.

Dad: Nope, he is not in any of the princess movies

Olivia: Is it Stitch?

Dad: Yup! Your turn. You think of a Disney character now.

Olivia: Ok, got it

I purposely take my time asking questions without her even considering that I am using a tactic to keep her running. 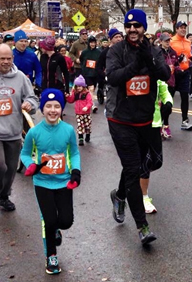 This was all the proof Olivia needed to convince her that I was right. We completed subsequent runs by playing the same game. On Thanksgiving morning we were up early and ready to gobble up the 5K for MS. Her nerves were normal, but her fear was absent. Olivia ran most of the course as we played our guessing game and I continuously pushed her to the next street light, corner or water station. Along the way, my words must have been overheard by others, because on several occasions, runners were thanking me for inspiring THEM to keep moving. Our run was a success and Olivia proudly crossed the finish in 40 minutes 34 seconds, completing a very difficult goal.

The next time you are on your run, keep in mind the power your mind can have over your thoughts. Prepare to snuff out these voices with the use of a good run mix, podcast or even by encouraging others by saying the positive things YOU want someone to say to you. In the end, you will see that running is indeed 90% physical and the other half is mental.