When I started my career as a massage therapist, one of the most helpful tools I had at my disposal was the fact that I had experienced many of the injuries that my athletes were presenting with. As I grew my practice, this was likely one of the key connections I could make with my patient when they would look to me for help. They knew I understood their pain and frustration. Back then; I was only recently removed from my years of competitive lacrosse, which saddled me with multiple shoulder dislocations, concussions, broken bones and I dare say, my worst injury of all, a hamstring strain. Sure the others sound more severe and may have caused more immediate pain (or loss of consciousness), but there is nothing worse than the lingering aftermath of a hamstring injury.

By now, most of us have at least heard about the show “American Ninja Warrior”. It’s a family favorite in our home. With the new season about to begin, my girls thought it would be fun to create a mini version at home where we would compete against each other and our own times. One of the challenges was an all out sprint around the house. A top the leader board with the two best scores through the first two rounds, I was primed, loose and ready to beat my best time of 29 seconds and to be declared the winner.

Oh, I’ll mention that I don’t let my kids win; ever. The day will come when they will easily beat their old man, but until then, second place is the first loser! 😉

As I started my third attempt I was feeling confident. Coming out of turn 2, I felt I had another gear and kicked it in as I entered turn 3.

It felt like someone just shot me in the back of my leg. It was in that moment, some call it “flow state”1, everything slowed down. I was immediately taken back to the second half of a lacrosse game, circa 1994, against Florida State when I experienced the exact same ‘shot in the back of the leg’ as I tried to beat a long stick midfielder at the top of the box. I recall feeling the same exact pain, yet whether it was the adrenaline pumping, the desire to not let my team down or just plain stupidity, I continued to run through it as the pain escalated and ripped through my entire leg. I won’t bore you with the details, but lets just say I regret not dropping down on the spot. That injury labored me for the rest of the season. All in an instant the memory flooded my thinking. In that split second, I was able to stop before taking another step, avoiding any further potential damage.

My girls came around the house looking for me, wondering what happened. I was barely able to walk, but was not about to let them see me crumble. I made my way back to the yard and reluctantly sat down.

My wife, who was not home at the time, returned to see me in quite a compromised state. However, I think she was even more surprised when I said, “This is a GOOD thing.”

“How is pulling your hamstring good in any way?!?” she asked.

I said, “Because now I can apply the same advice I give my patients to my own injury. I will be able to determine if the recommendations I give them are effective and how much patient compliance is required to effectively recover from this type of injury.”

Of course, she just shook her head, rolled her eyes and walked away.

As I type this, I am almost 72 hours post injury and my hamstring feels great. It still hurts and I know I can’t accelerate past a jog or I am likely to exacerbate the injury.

The following advice for treating a grade 1 hamstring strain is by no means considered to be a rehabilitation certainty. The results I experienced may undoubtedly vary from person to person. There are way too many factors to consider when comparing similar injuries. This is merely my own personal experience in dealing with MY hamstring injury and basing it off of research that I have come to trust and dispense over the years. I hope that some of the steps I took to recover are helpful to someone else who may require some advice.

Immediately following the injury, I sat down and did my best to stretch the hamstring. I use the term ‘stretch’ loosely since just a small forward bend at the waist created a ‘stretch’. The objective is to assist the muscle to return to its normal tonus state. Failure to not do this in fear of creating more damage will likely result in a more stubborn spasm. This is a VERY important part of treating a muscle strain successfully (IMHO).

When attempting to stretch a strained muscle, listen carefully to the signals being sent. Stretch to the point of mild discomfort. That is to say, there will be pain associated with the mild stretch and there will also be pain associated with the spasm. If you can separate the two sensations and provide a mild stretch, you will trigger a neurological response that will encourage the muscle to start to release the spasm. There will be a point when you reach the end range of a ‘safe’ stretch that your brain sends a signal of pain informing you to not go further in fear that it may cause damage to the muscle. This is known as the myotatic stretch reflex.

Comfortably hold that position. Take a slow deep breath. This helps in ‘resetting’ the signal you are feeling. Once that signal dissipates, slowly inch forward until you sense it again. Repeat this a few times and then slowly return to a neutral position, calming the stimuli and resting the muscle. This type of stretching will be very effective as you begin to regain normal tone of the hamstring.

You may be wondering why I did not immediately place ice on the injury. Last March, Dr. Merkin, the man who coined the acronym R.I.C.E. (Rest Ice Compression Elevation) back in 1978, shook the rehab world when he stated on his website:

“Applying ice to injured tissue causes blood vessels near the injury to constrict and shut off the blood flow that brings in the healing cells of inflammation (Knee Surg Sports Traumatol Arthrosc, published online Feb 23, 2014). The blood vessels do not open again for many hours after the ice was applied. This decreased blood flow can cause the tissue to die from decreased blood flow and can even cause permanent nerve damage.”

Does this mean you should never ice an injury again? No. He goes on to say:

“Since applying ice to an injury has been shown to reduce pain, it is acceptable to cool an injured part for short periods soon after the injury occurs. You could apply the ice for up to 10 minutes, remove it for 20 minutes, and repeat the 10 minute application once or twice. There is no reason to apply ice more than six hours after you have injured yourself.”

With that research in mind, I opted for what I have been touting for a while now; BioFreeze. I sprayed a liberal amount to the back of my thigh and let the ‘magic’2 begin.

Full disclosure: I am a hired consultant for the parent company, Performance Health, who is also the maker of TheraBand Kinesiology Tape.

“BioFreeze is a professional grade pain reliever. It has been clinically proven to help reduce pain. Laboratory researchers have discovered that menthol stimulates the TRPM8 cold receptors. With the isolation and further study of these specific TRPM8 receptors there is stronger evidence supporting the benefits achieved with the cooling effect of menthol in functioning as a topical analgesic while activating these receptors and the resulting consequent pain relief.”- www.biofreeze.com

Approximately 4 hours had past since the initial injury occurred. The application of the BioFreeze significantly helped with the pain, which in turn helped my muscles to relax even more from their spastic state. 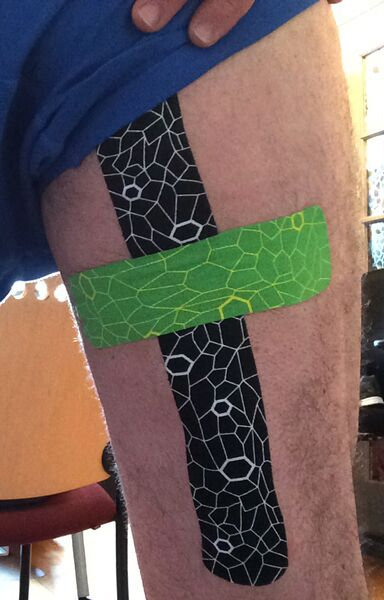 Now it was time for me to really put my money where my mouth is. It was time to see if kinesiology taping would be effective in reducing the pain even more. I can’t begin to count the numbers of hamstrings I have taped over the years. However, I have never taped my own. There are two VERY important steps when properly applying kinesiology tape. The first is to be certain that the area is clean. For many, this means spraying the hamstring down with some alcohol and wiping it off, for others, like me, it means that you have to shave any body hair that would prohibit the tape from adhering to the skin. So, I broke out the trimmer and shaved the back of my thigh (just the area that was to be taped). The second and frankly more challenging step is to place the area being taped on a stretch. This would prove to be comical if anyone were around to watch (which I made certain there was not).

Once I completed the application, it was time to rest for about 15 minutes (the recommended amount of time to rest prior to using the tape). The tape application was immediately noticeable in its ability to restore normal tone and to modulate the pain. I can now keep this tape on for at least 5 days without worry. That means the injury is receiving therapeutic support 24/7. Even while I sleep, the tape is working to assist the ongoing healing process. That has to be a good thing. Wouldn’t you agree?

Feeling the positive impact of both the BioFreeze and the tape, I determined that I must continue to move the hamstring; otherwise, it will likely tighten due to the repair process that is attempting to lay down scar tissue to mend the injured area. I set out for a 15-minute walk with the dog just to keep things loose. When I returned home, I did my best attempt at stretching again and followed that up with some icing for the pain for about 10 minutes.

I repeated the cycle of walking, BioFreeze (over the tape) and stretching about every 3-6 hours throughout the weekend. I am happy to report that almost 72 hours post incident, I can touch my toes again and have very little pain with movement. This by no means indicates that the injury is gone. It is only the beginning of a proper recovery. I will have a long road ahead to be sure that I do not re-aggravate the injury and that I don’t create compensatory gait patterns to avoid loading the hamstring.

Next on the agenda today will be a massage to help loosen the tissue a little more, followed by some active isolated stretching in an attempt to begin to restore normal range once again.

I never like to get injured. Who does? However, in this case, I was fortunate to recall the experience of my misguided youth as a young, dumb, invincible man. It is my hope that a previous injury that you may have endured provides you with the same clarity at the right moment and some of my advice comes in handy for you. Who knows? Perhaps the next American Ninja Warrior will thank me for this advice some day as they reach the top of Mount Midoriyama.