Can an Old Dog Teach You Something New? | Boston Bodyworker 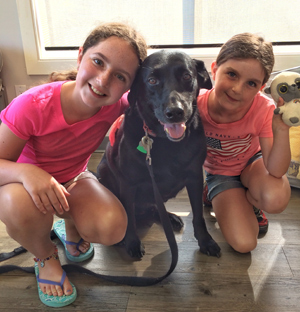 Logan at Pre-Op with his Sisters

Last week I had to make a determination to have my dog, a 12-year-old black lab, to undergo surgery to remove what we believed to be a lipoma. Lipoma’s are commonly found in animals, as well as people. Perhaps you have noticed one of these lumps on yourself and were curious about what it may be. A lipoma is benign tumor composed of adipose tissue (fat). It is more common in adults 40-60 years old, but are also found in younger adults and children. I myself have several small Lipoma’s in my lower back. They are typically asymptomatic. They are soft and squishy and tend to not be of any significant pain or discomfort.

However, although they may be benign in the sense of a tumor, they can, at times cause pain when they develop around tissues such as nerves, muscles and ligaments. When this occurs, this may cause shooting pains from nerve entrapments, lameness or even changes in basic movement patterns, depending upon their size. Regardless of if you are a dog or a person, Lipoma’s are all the same. We treat many patients at The Boston Bodyworker who have what we may feel as a Lipoma. As a therapist, it is our job to indicate these findings to you if you are unaware of them (many are) and we recommend getting them checked out by a doctor just to be certain they are nothing more.

I wanted to use this platform to not only educate you, but to also show you what a Lipoma actually looks like. In the case of Logan (my dog), he has developed multiple Lipoma’s all over his body as he has grown older. Lipoma’s in labs are very common and not usually something to be alarmed about. They are certainly worth getting checked out by a doctor, but unless there are other symptoms that accompany them such as appetite loss, mood changes or elevated enzymes in the liver, symptoms that are typical with malignant tumors, doctors will commonly tell you to leave them alone. In Logan’s case, we monitor them and chart them with the doctor.

Logan began to experience some lameness in his hind left leg a few months back. Unlike, patients we see here, he could not vocalize what he was feeling. The doctor felt that since he was getting older, it could be a matter of arthritis developing in his hips or perhaps some dysplasia. Test did not indicate this, but again, without Logan’s ability to speak, it would require x-rays to determine this. After seeing him get increasing weaker and unable to sustain a walk of more than 10 minutes, I felt that it would be best to have the Lipoma’s on his hindquarter removed with the hope that doing this would provide relief to an entrapped nerve or muscle. 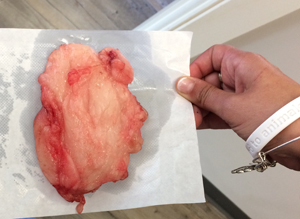 Here is an image of the Lipoma that was removed from Logan. As you can see, it is one HUGE piece of fat. It was slightly larger than a softball. The doctor reported that it was wrapped in and around his hamstrings and Achilles as well as some nerves. “Logan has the hips of a 6 year old,” stated the Vet when he showed me his X-rays.   It is still early in his recovery, but we are hopeful that he will be returning to his normal activities of nightly 2-mile walks and catching Frisbees before long.

There is no way to avoid Lipoma’s. Some of us are more predisposed to them than others. If you do notice any ‘bumps’ or ‘lumps’, we suggest that you always get them checked out by your doctor. Palpation of these is never 100% accurate and early detection may be the difference between life and death in some cases.